The history of Vizianagaram district is with Kalinga dynasty. In modern times, the upper part of Kalinga was gradually merged intoOdisha state and the lower part into Andhra Pradesh. The Kalinga empire extended from Cuttack in Odisha to Pithapuram in East Godavari district as far back as the 4th century BC. The Nandas ruled the area between 467 and 336 BC. They were followed by the Mauryas, the Chedis, the Satavahanas, the Pitribhaktas, the Matharas, the Vasishthas, the Vishnukundinas, the early Eastern Gangas, the Eastern Chalukyas of Vengi, the late Eastern Gangas, the Reddis of Rajahmundry and the Velanati Cholas till the Kakatiyas appeared by 1210 AD.

Recorded evidence show that some local dynasties like the Rapatri Chiefs and the Gangas of Narayanapura (situated nearBalijipeta), the Gangas of Jantarunadu (the track now known as Srungavarapukota), ruled over parts of the district from the 12th to 15th century.

The Kakatiya rulers under Ganapatideva defeated the Velanati Chola Chief, Prithvisvara who was ruling over the territory in 1210 AD. The territory was recovered by the Eastern Gangas during the reign of Ananga Bhima III. The Gajapatis of Odisha then came to rule the territory after overthrowing the Eastern Gangas in 1443 AD. The rule of the Gajapatis lasted for about 140 years till the Qutb Shahis conquered the territory around 1574 AD. Consequent on the occupation of Golconda by the Mughals in 1687 AD, the area came under the control of Mughals. When the Viceroy of the Mughals in Deccan, Nizam-ul-Mulk Asaf Jah declared independence in 1724 AD, the area came under the rule of the Asaf Jahis.

In the war of succession after Nizam-ul-Mulk Asaf Jah died, Salabat Jung who came to power with the backing of the French General Marquis de Bussy, rewarded the French by ceding four Circars including the Chicacole Circar in 1753. An important event in the history of the district which occurred by about this time is the war between the Rajas of Vizianagaram and Bobbili, popularly known as Bobbili Yuddam. The war was fought between the MahaRaja of Vizianagaram aided by the French General Bussy and the Rajah ofBobbili on 24 January 1757.

Another important event in the history of the district is the war between the French and English fought at Chandurthi in 1758, in which the French were defeated and the Northern Circars were made over to the British under a firmana from the Mughal emperor Shah Alam in 1765 which were placed under the then existing Chief and Council at Vizagapatam. In 1794, the Chiefs and Councils were abolished and Vizagapatam was arranged into three divisions each under a collector. Almost the entire area of the present area of Vizianagaram district fell under the second division. However the three divisions were merged and a collectorate for the whole district was established in 1803 after the introduction of the permanent settlement in the area.

The history of the rebellions against the British rule goes back to 1830s when the people of the district particularly the tribals unable to bear the oppression, rose in frequent rebellions (fituris) leading to the establishment of separate administrative system known as "Agency Administration" under the India Act XXIV of 1839. The rebellion of Korra Mallaiah, a tribal chief of the Salur area against the British rule in 1900 is another important event. The district magistrate dispatched Reserve Police to suppress the revolt, which was seriously resisted by the people. In the skirmish that followed many were killed. Korra Mallaiah along with son was arrested and kept in Jail where he died subsequently. Subsequently in the Indian freedom movement, the people hailing from this area enthusiastically took part in various phases like non-cooperative movement, civil disobedience movement, Quit India Movement etc.

The district is currently a part of the Red Corridor.[4] 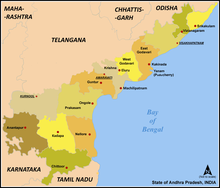 The district can be divided into two distinct natural divisions i.e. plains and hilly regions. The hilly agency area covers Pachipenta andGummalaxmipuram mandals fully and Salur, Makkuva, Ramabhadrapuram, Parvathipuram and Komarada mandals partly. Rest of the area is plain. The agency region mostly consists of hills covered by the Eastern Ghats which run parallel to the Coast from the North-East to South-West. The average height of these hills is over 914 meters, although there are several peaks of 1,219 meters high. In Parvathipuramdivision, the hills are lower than elsewhere and consists of steep and rugged lines devoid of plateaus.

The main towns of Vizianagaram district was Parvathipuram on the north, Cheepurupalli on the east, Vizianagaram on the south and S.Kota on the west. Remaining main towns Bobbili and Salur in the centre of the district.

The main soils are red soils, sandy loams and sandy clay, which constitute 96% of the total area. The predominant soils are loamy with medium fertility. There are red loamy soils in dry lands and clay loamy in wet lands. The soils at some places are as thick as 4 metres, probably represents alluvium along the valleys.

The total geographical area of the district is 6300.38 km². About 51.1% of the land area is sown for agriculture and another 12.3% land is put to non-agricultural uses. The forest covers about 17.8% of the land. About 12.3% of the land is Barren and uncultivable. About 4% land is current and other Fallow lands.

There is a coast line of 28 kilometres in the district on the east facing Bay of Bengal. There are 8 villages and 16 hamlets consisting of 6,993 fishermen. They are situated inPusapatirega and Bhogapuram mandals.

Fauna in the district is fairly high in the interior hill regions, but it is heavily threatened with extinction. The reasons for the depletion are mainly shrinkage of habitat and uncontrolled poaching. The principal animals are yellow bat, sloth bear, wild buffaloes, fox, hare, hyena,jackal, mongoose etc., The principal birds are blue rock pigeon, house crow, house sparrow, common myna pitta etc.

The climate of Vizianagaram district is characterised by high humidity nearly all-round the year with oppressive summer and good seasonal rainfall. The summer season from March to May is followed by South West monsoon season, which continues up to September. October and November constitute the retreating monsoon season. The climate of the hilly regions of the district receives heavier rainfall and cooler than the plains. The maximum temperature recorded during 2004 is 39.6O C during May and the minimum temperature is 17.1O C during December.

The normal rainfall of the district for the year is 1,131.0 MM as against the actual rainfall of 740.6 MM received during 2002-03. The district gets the benefit of both the South ?West and North- East monsoon.

The average maximum and minimum temperatures and average rainfall recorded in 2004 at Agricultural Research Station, Vizianagaram are given below:

The below table categorises 34 mandals into their respective revenue divisions in the district:[12]

In 2006 the Indian government named Vizianagaram one of the country's 250 most backward districts (out of a total of 640).[15] It is one of the thirteen districts in Andhra Pradesh currently receiving funds from the Backward Regions Grant Fund Programme (BRGF).[15]

Vizianagaram district is predominantly an agricultural district as 68.4% of the workers are engaged in Agriculture and about 82% of the population is living in rural areas and depend on Agriculture for their livelihood. Rainfed farming is the characteristic of Agriculture, as about 80% of the cultivation is purely under rain fed conditions. Even the irrigated area is mostly depend on the rainfall. Hence majority of crops grown are dry crops. Paddy crop is cultivated mainly during Kharif season with 80% of the area is under Tanks which in turn depend on the rainfall. The major crops grown are paddy, mesta, groundnut, ragi, bajra, cotton, sugarcane and pulses. The average crop yields are low.

There are no major irrigation projects in the district. The Denkada Anicut, Thatipudi Reservoir, Andra Reservoir Project, Vegavathi Anicut, Surapadu Anicut, SeethanagaramAnicut, Peda Ankalam Anicut, Vottigedda Reservoir Project, Paradi Anikut, Thotapalli Regulator and Vengala Raya Sagaram Project are the medium irrigation projects.[16] The total irrigated area under these projects and the other minor projects is about 285,077 acres (1,154 km2). Jhanjavati Project[17] is constructed in 2005 in Komarada mandal on river Jhanjavati, a tributary of River Nagavali. It is a rubber dam and first of its kind in India and the biggest in Asia.

The industrial development in the district generally agriculture based and consists of Jute mills, Sugar factories, Rice and Oil mills and Tiles manufacturing units. The mineral deposits are utilised by the FACOR and other industries. There are 520 factories registered under the Factories Act in 2005 in the district employing about 27,800 workers (males and females).

The social customs in Vizianagaram district are South Indian Style with minor changes. The local people are soft-spoken and kind at heart with strong family traditions. Gurajada Appa Rao (1862–1915) used all forms of literature like drama, novel, poetry, short story and essay with equal facility. He assimilated the culture and language of this region and became the forerunner of social reforms in India.

The predominant religion is Hinduism. The major festivals are Sankranthi, Ugadi and Rama Navami, Maha Shivaratri, Deepavali, Ganesh Chaturthi, Dasara and Vijayadasami. The nine-day festival celebrations during Rama Navami and Ganesh Chaturthi are very popular in many towns and associated with many cultural events including Stage Dramas, Harikathas, Burra kathas etc. Festivals of Gramadevatha are held annually at Vizianagaram, Bobbili, Salur, Parvathipuram and Sambara with much fanfare. The most popular amongst them is Pydithalli Ammavari Jatra, celebrated at Vizianagaram on the next Tuesday of Vijayadasami day. And also Polamma Jatara, at Sambara in Sambara Village of Makkuva Mandal is a Very much state known famous festival being celebrated in every 3rd week of January. This is a very renowned festival for north andhra people.

The cuisine is strikingly South Indian Style with Rice as the staple food accompanied by Dals, Rasam or Sambar, Vegetable Curries, Pickles and Curd.

A Road near Alamanda Village in Vizianagaram district

Andhra Pradesh State Road Transport Corporation (APSRTC) is the major public transport system operated by fleet of buses. Vizianagaram is one of the 4 zones and one of the 23 administrative regions headed by General Manager of APSRTC. There are 4 bus depots at Vizianagaram, Parvathipuram, Srungavarapukota and Salur. There are many bus stations in the entire district.

Auto Rickshaw, Cycle rickshaw and Cycles are the major modes of local transport in the small towns and villages. 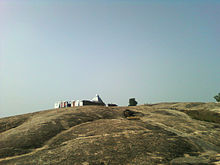 Ramatheertham is a village panchayat in Nellimarla mandal of Vizianagaram district. It is located 12 km from Vizianagaram city.

The primary and secondary school education is imparted by government, aided and private schools, under the School Education Department of the state.[24][25] As per the school information report for the academic year 2015-16, there are a total of 3,875 schools. They include, 85 government, 2,060 mandal and zilla parishads, 1 residential, 618 private, 16 model, 33 Kasturba Gandhi Balika Vidyalaya (KGBV), 112 municipal and 423 other types of schools.[26] The total number of students enrolled in primary, upper primary and high schools of the district are 307,298.[27]

Vizianagaram district has been comparatively backward in the field of education. The literacy rate is 51.82% as against the average of 61.55% for the entire Andhra Pradesh State.

Television and Radio are regular homely entertainment. Telugu films are very popular in recent days. There are as many as 81 Movie theatres in almost all the towns, mandals and big villages in the district. In many places, it is the only mode of entertainment outside.

The Maharajkumar of Vizianagram fondly known as Sir Vizzy popularised the cricket game in North Eastern Coastal Andhra Pradesh. It is in honour of this great entrepreneur of cricket that Vizzy Stadium was made in his home town, Vizianagaram. The Vizzy Stadium is one of the Cricket grounds in Andhra Pradesh, where first class cricket is played. Vizzy led India in Test cricket and later became a cricket administrator and commentator. He was the President for the Board of Control for Cricket in India. He loved doing commentaries for All India Radio. He was a very benevolent man, who donated the Wellington pavilion at the Ferozshah Kotla stadium in New Delhi.